Ferns bring both refined elegance and woodland authenticity to a garden. Shot at Reford Gardens in Quebec, August, 2014.

This is the second in a series of posts covering very special but easy care plants to grow in honour of Canada’s birthday. Ferns are popular for being equally good at giving a garden a nice touch of swish and authentic wild woodsyness. These 3 additions to my Celebrate Canada Plants List are all gorgeous ferns that are widely available, easy to grow and (best part) native to Canada.

You can find Christmas Fern in the wild through most of eastern North America (including all provinces from Ontario eastward). Its common name was probably inspired by the fact that it’s evergreen through some of Canada’s harshest winters. Long before artificial trees and neon string lights, the fern’s fronds of leathery green leaflets were used to bring a little freshness to Christmas decor. I have to admit that digging through a pile of snow to reveal its lovely lacy greeness in the bleakest of months is one of the reasons I love this plant. (Read my mash note to the first Christmas fern I bought in A fine fern for now.)

Hardy in Canadian gardening zones 4 to 9, it can grow to about 45cm/1½ft wide and up to 75cm/2½ft high in an asymmetrical clump with fronds that spray out from a crownless rootstock. Christmas fern needs winters and springs that deliver a lot of moisture and defined seasons–cold winters, warm summers. Soil can be loamy to rocky but never waterlogged and abundant leaf litter is a must. 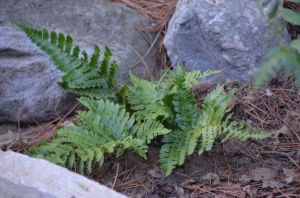 My pet Christmas fern in its second year in my southwestern Ontario garden (zone 6b) photographed October, 2015.

Christmas fern likes full shade but not dark shade. For the best chance of success, plant your Christmas fern in a place that’s similar to where it would normally grow in the wild–under a group of deciduous trees or a mix of deciduous and evergreen trees but not under a canopy of evergreens exclusivley.

Christmas fern naturally snuggles up to:

Like many ferns, Christmas fern looks great when planted in a big grouping. If you have a limestone rockery, this is the fern for you. Although rhizomatous, it won’t spread but the clumps will increase in size over time. You can divide established plants in the spring.

Who needs colour when you can have such beautiful combinations of textures? This woodland-themed garden in Toronto featured a small creek separating two lawns. Shot in June, 2016.

I’m kicking myself for not taking photos before moving to British Columbia of the lovely Hart’s Tongue I had in my southwestern Ontario garden. So you’ll just have to make do with this link to some nice photos of one. Looking more like a thick grass than a fern, it forms a rosette of strap-like undivided fronds arching up to 75cm/2½ft in length. Once you’ve seen one, I guarantee, you’ll want one….and a couple of the super cute cultivars like ruffly ‘Angustifolia’.

In Canada, this fern now grows wild only in Ontario but can be grown anywhere within Canadian gardening zones 4 to 9. It’s another fern that loves limestone so if you live on the Niagara Escarpment, this fern’s for you, too. Like the Christmas fern, it doesn’t like to be surrounded by a contingent of conifers. Hart’s Tongue is found in the wild near the same trees as Christmas fern (listed above) as well as Black Cherry (Prunus serotina), Yellow Birch (Betula alleghaniensis), White Birch (Betula papyrifera), and Eastern White Cedar (Thuja occidentalis) If you want it to feel right at home, plant it with Maidenhair fern, another native. These two are often found together in their wild plant communities.

Also known as the Fiddlehead fern, with fronds that, yes, look just like ostrich feathers, this fern of ferns is also a quintessentially Canadian fern, native to every part of the country (hardy in Canadian garden zones from 1b to 9). And, rightly or wrongly, this fern is surprisingly tolerant of urban pollution.

Another unusual characteristic for ferns in general is that the Ostrich fern can tolerate full sun but only if it’s situated in consistently moist soil. It does best in part to full shade under a mix of deciduous and evergreen trees. In the wild, you can find it under mixed stands of Western redcedar (Thuja plicata), White spruce (Picea engelmannii × glauca), subalpine fir (Abies lasiocarpa), Black cottonwood (Populus balsamifera ssp. trichocarpa), and Paper birch (Betula papyrifera) or under a canopy of only deciduous trees such as Silver maple (Acer saccharinum), Green ash (Fraxinus pennsylvanica), American elm (Ulmus americana) and Eastern cottonwood (Populus deltoides). Bonus: this fern doesn’t have a problem being planted under a Black Walnut (Juglans nigra).

If you want to get really Canadian about it: plant Ostrich fern with other native ferns that grow alongside them in the wild in your area.

The tricky thing about Ostrich fern (beside its size) is that it can become invasive (not in the alien sense but in the thug-amongst-the-delicates sense). This fern is best grown in a large area where it can do its natural thing but still be controlled if necessary. These ferns make an excellent backdrop for plants that are equally large but have contrasting shapes and textures as in these two examples shot at Reford Gardens in Quebec. 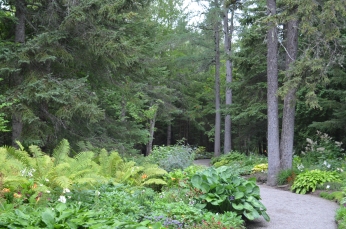 Ostrich fern in a mass planting with a large bed at Reford Gardens. Shot in August, 2014. 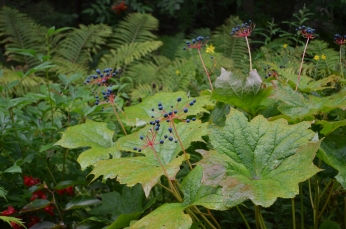 The finely textured ferns in the background make a striking contrast to the large leafs of the Umbrellaleaf (Diphylleia cymosa), with its lovely blue berries on red stalks you need to see up close. Shot in Reford Gardens in August, 2014.

Follow Ministry of the fence on WordPress.com
Join 332 other followers 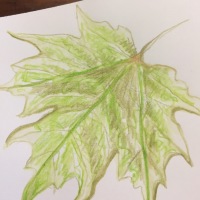 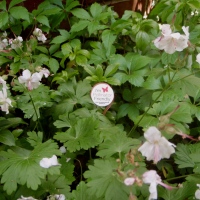