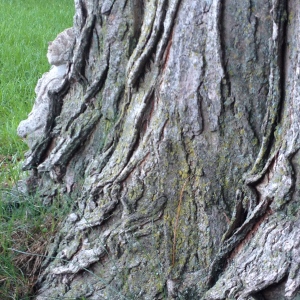 My vintage garden gnome is keeping a big secret about the spirit of our garden. Shot in my backyard, September, 2016.

There’s a spirit in your garden and I think I can help you find it. But, first, we’ll need to back up…a lot. In ancient Rome, everyone had their own personal guiding or guardian spirit called, in Latin, a genius. (Love that.) And there were protective spirits for a place, too. Guess what one of those was called. Yup, a genius loci. Nowadays, landscape designers and architects still look to the genius loci when they’re trying to figure out the right design approach for a particular garden or home. (By the way, if you happen to find more than one spirit in a place, you’ve got genii loci. It happens.) Rob Littlepage, founder of the California School of Garden Design, writes about recognizing the spirit of a place as “having respect for the surrounding landscape and life of the place, and an understanding of it.” Part of this respect involves enhancing its unique physical characteristics and how it’s uniquely perceived.

So what is your property’s distinctive nature? What makes it special? What is your garden’s genius loci? Those were the questions Frank Kershaw posed during one of his garden design classes I attended recently at the Toronto Botanical Gardens. I drew a blank. I’d never stopped to consider what’s exceptional about my garden beyond what I’d put into it. I have a front yard and a back yard in the middle of suburbia, surrounded by other almost-identical homes on flat land. I think I’ve done a pretty good job of creating green, growing delights for all the senses within the confines of our property lines. But I’d never once thought of looking at the bigger picture. What are the underlying characteristics of our property that make it special like no other place on earth?

I thought maybe I was too close to my own garden to see its genius loci. So I thought of looking at another garden–one that’s undeniably distinctive. Maybe its genius loci, famously unique, would loom so large as to be unmistakable. I picked Sissinghurst Castle Garden. I visited this hallowed garden back in the mid-Nineties so the photos below may not represent what the garden looks like today but no matter. As I flipped through my photo album (this was way before digital cameras), this garden’s genius loci materialized with breathtaking clarity. Sissinghurst, situated in the middle of very picturesque farmland, is dominated by two original buildings: one very long and narrow residence called the Tudor range, (seen below), the other, a tall, slender Elizabethan tower, circa 1560-70 (also seen below). Both add imposing linear shapes to a landscape already carved into neat rectangles of pasture or field. (Click on any photo for more details.)

The largest building at Sissinghurst is very long and narrow. Shot in the summer of 1996.

The Elizabethan Tower, circa 1560-70, is a focal point of the gardens. 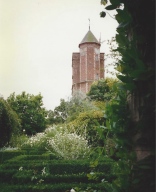 The tower can be seen from many parts of the various rooms of the garden.

From the tower you can see the surrounding countryside divided by hedgerows.

Old stone walls, part of the original castle, lend even more verticals and horizontals, providing the foundation for the garden “rooms” for which Sissinghurst Castle Garden is so famous.

Brick walls throughout Sissinghurst Castle Gardens reflect the genius loci of the garden.

Old walls and doorways are used to add mystery and intrigue in the garden at Sissinghurst.

Archways through ancient brick walls at Sissinghurst lead the eye and beckon the visitor to another garden room.

Reflecting Sissinghurst’s genius loci so brilliantly are many, many hedges, adding a graphic geometry to the garden and its rooms with razor-sharp lines. Even the famed White Garden (shown below in a photo taken from the top of the Tower), is divided into small rectangles by low hedges and framed by brick walls and tall hedges. 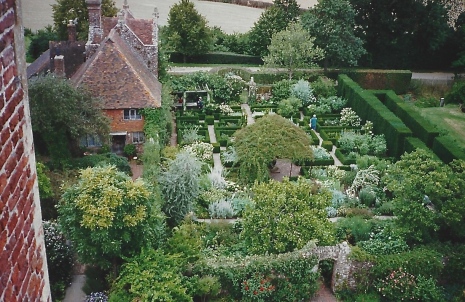 The famous White Garden at Sissinghust is surrounded by walls and tall buildings.

A view created by two parallel hedges is punctuated by a garden sculpture at Sissinghurst. 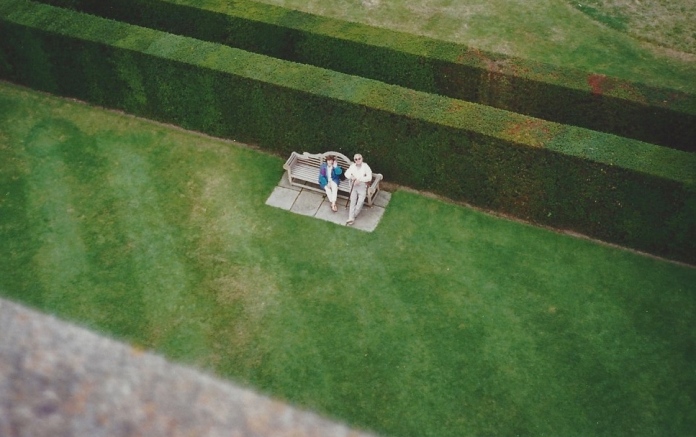 The hedges at Sissinghurst are formidable and gloriously celebrate the genius loci of Sissinghurst.

Now everywhere I look I hunt for genii locorum (spirits, places) and, now that I’m starting to understand how I should look and why, I’m finding them right in front of my eyes. Take Reford Gardens for instance. Located on the north shore of the Gaspe Peninsula in southern Quebec, it’s very large (over 20 acres) so I’d say this is a haunt of genii locorum. But one that now stands out for me is the surrounding mixed forest that hugs each garden. Given that Reford Gardens is on the shore of the mighty St. Lawrence River, I’m sure this forest earns its keep as a wind break and shield against harsh weather. But the dense wood also provides a tall, dark backdrop, throwing a garden’s horizon lines and its colours and textures into sharp contrast. These photos (seen directly below, shot in August, 2014) show a variety of garden views. Looking back on these images, I realize that, at the time, I was hardly aware of the forest’s presence because I was so enthralled with the plants, pathways and sculptures. 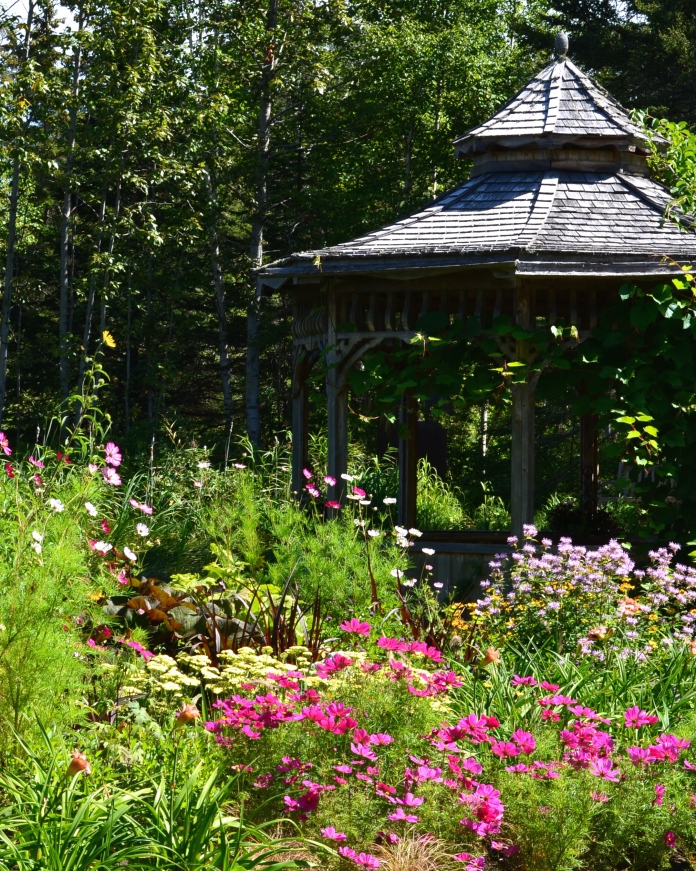 I think Keppel Croft Gardens in Big Bay, ON, on the east coast of the Bruce Peninsula, has one genius loci but it’s a powerful one–the stony ground. From the skilled and very patient hands of Bill and Dawn Loney, Keppel Croft has grown out of an abandoned gravel pit and a diverted, very rocky, river bed. They’ve had to use pick axes to start flower beds but the results are an extraordinary celebration of their genius loci. The stones from every plant hole dug are used as mulch and garden design elements such as a dry creek, terraces and pathways (all shown below). These photos were shot in July, 2015.

So did I discover my own garden’s genius loci? Yes, I did. And, like the proverbial elephant in the room, it’s huge yet is rarely acknowledged.

A garden design can be an elusive thing but sometimes all you need to do to find that remarkable genius loci is look up.

Only the Sense of the Sacred can Save us