With this inaugural posting from my new and improved blog (formerly RhymesWithLinnaeus.com), I want to state for the record that Ministry Of The Fence may be adding greener perspectives on gardens and gardening but there will continue to be a strong appreciation for both the sublime and, yes, the unserious. So what better way to kick off the new year and this new blog than to explore sublimely unserious green–thinking garden hideaways. Hey, winter has put a cold hold on gardening in general so why not give in to a good garden project fantasy in the comfort of your armchair?

Then look out your window and decide where you might want to create your ″quiet place″. Granted, the cabins you’ve just drooled over are, for the most part, way out in the middle of spectacular countryside. But there are good reasons to consider building right in your own backyard.

Here are some of my favourite hideaway ideas and, yes, I have unabashedly included some of my own projects.

THE RECLAIMED GARAGE: Turning old stand–alone garages into garden escapes/studios is a popular thing to do in Toronto, it seems. At the home I owned before I moved in with my guy, the tiny backyard included an old wooden single car garage with broken doors and an uneven concrete pad that had cracked and started to heave. I took off the two walls facing into the garden and, rather than pulling up the broken concrete, simply built a floating wood deck on top. As a freelancer, I worked out of this office from spring through fall, even when it was raining. Pure heaven. And for such a tiny garden, overlooked by my towering neighbours in that densely packed urban Toronto neighbourhood, my garage–cum–office/party shed gave me a great deal of extra privacy. (Click on any photo for more details.)

Pulling up the broken concrete pad would’ve been costly. Instead, a wooden floor, built just like a deck, was floated over top with shims put in place to keep the floor level and stable over the uneven concrete. 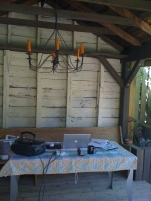 After tearing down two walls, trusses and posts were added. I lightly painted directly over the dirt and tar splattered walls to get an instant weathered look. A church pew, bought at a Habitat for Humanity outlet, served as desk chair and extra party seating.

This photo was taken from behind my desk looking towards the stairs leading up to my deck and backdoor. Our (now deceased) dog helpfully acted as a reference for proportion. It was a tiny garden but just the right size for an urban escape.

THE ELEGANT PORTAL: Some garden hideaways are transportive. Technically, the mysterious Gothic structure (below) is a folly but I like to think it is an absolute truth. You can’t fake a good garden hideaway. It is the expression of pure garden love. (Click on any photo for more details.)

I love how this traditionally styled gazebo is actually quite untraditional in shape. The tall, narrow rectangular shape gives the shelter unexpected grandeur (given the actual size of it) and serves as both fence and gateway to a wide lawn behind it. (Photographed during a Toronto Botanical Garden tour in the countryside north of Toronto, July, 2015.)

What is it about gazebos that attract people. This one overlooks wildly planted beds of flowers and a small pond. I had to wait a long time before I could catch a photo of it without people in it and around it. (Photographed at Reford Gardens, on the south shore of the St. Lawrence on the Gaspe Peninsula, Quebec, August, 2014.)

Technically, this is a folly but I like to think of it as an absolute truth. You can’t fake a good garden hideaway. It is a pure expression of garden love. BTW: in the scorching summer sun, this is a very cool place to chill, literally. (Photographed during a Toronto Botanical Gardens tour in the countryside north of Toronto, July, 2015).

If you are going for charm, you might as well go all the way. This is a detail shot of the seated archway leading to one of the many amazing gardens at Keppel Croft. (Photographed at Keppel Croft gardens in Big Bay, on the Bruce Peninsula, Ontario, July, 2015.)

THE EXOTIC RETREAT: A garden hideaway may be only a stroll away from your home but it has the potential to take you very far away. This backyard retreat is close to the heart of downtown Toronto but it exuded a tropical feeling thanks in no small part to the bright Bali–style fabrics used for the furnishings. A water feature, running the length of the garden bed flanking the rear of the property, emptied into a small pool at one side of the building. Stepping stones were placed so that you could walk directly from the hideaway, over the pool into a green jungle of perennials. (Click on any photo for more details.) 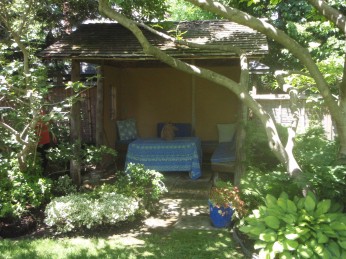 To push home the idea of retreating to a tropical paradise (in downtown Toronto) the owners accessorized their hideaway with bright fabrics. 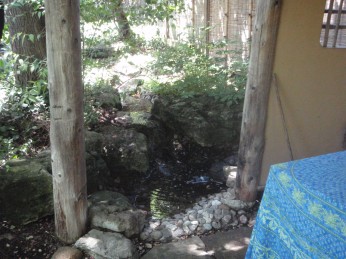 A water feature simulating a stream runs the length of a garden bed flowing into a small pool at one side of the hideaway.

THE HUMBLE WORK HIDEAWAY: Vegetable garden sheds are arguably the hardest working of hideaways. And, yes, I believe they do double duty as hideaways. All the best ones I have had the pleasure to explore were furnished with at least a folding chair and a kettle or a bottle of wine. They’re also marvellous expressions of their owner’s creative whimsy. The shed, below left, has a roof that keeps going and going. Love it. And the two photos below right, taken from outside and inside the shed, are of my dear cousin Anne’s garden allotment in southern England. She told me once that this garden is a little piece of heaven. I believe her. (Click on any photo for more details.)

Whoever created this vegetable garden shed could have just built your average shed, but they didn’t. That roof just soars. You know there is going to be folks gathered under it after a good day of planting or harvesting.(Photographed at Keppel Croft gardens in Big Bay, on the Bruce Peninsula, Ontario, July, 2015). 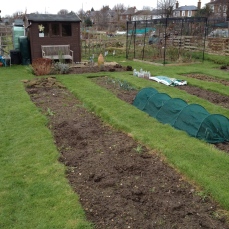 This is the garden shed of my dear cousin Anne. Her vegetable garden, in an allotment park near Hampton Court Palace in southern England is, as you can see, neat as a pin and so welcoming, even in the middle of winter. (Photographed January, 2015). 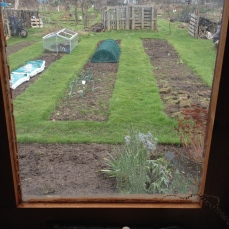 Here is the view from inside Annes cozy shed. It shelters some of her tools as well as a kettle and a hot plate, of course. (Photographed January, 2015).

HIDEAWAYS DISGUISED AS OTHER THINGS: No snickering here, please. I’m sure you’d agree that a loo can be a very comfortable hideaway, particularly when it’s fitted with a lovely stained glass skylight for maximum reading and pondering pleasure, as you can see on the building at right. The generously proportioned firewood shelter, at left, with its screening walls covered in blooming clematis, has enough room for a winter’s worth of wood plus a couple of chairs and a table. (Click on any photo for more details.) 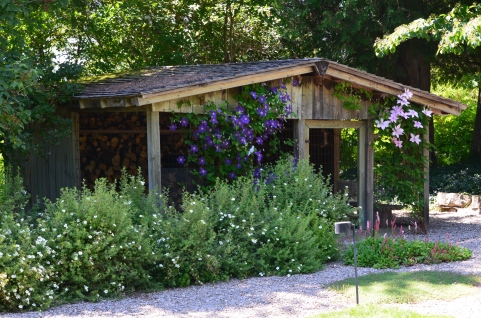 This grand open air shelter stores enough wood to get the homeowner through the worst winter with plenty of room to spare and with three of its sides finished with screening for clematis to cover, I suspect more than stoking fires takes place here. (Photographed on a Toronto Botanical Garden tour in the countryside north of Toronto, July, 2015.)

If you look through the slit above the door, you can just make out the golden stained glass inserted into the roof of this very well appointed outdoor loo. (Photographed at Keppel Croft gardens in Big Bay, on the Bruce Peninsula, Ontario, July, 2015.)

THE EPHEMERAL HIDEAWAY: Can you hide in plain sight? Depends on how tall your garden grows. At the height of summer, this welcoming bench can only be seen once you’re practically sitting on top of it. I love how the “walls” framing the bench have been recycled from an old screen. (Click on any photo for more details.)

You can barely make out the top of the screen backing the garden seat in this shot. The garden is at its height at this point. (Photographed at Keppel Croft gardens in Big Bay, on the Bruce Peninsula, Ontario, July, 2015.) 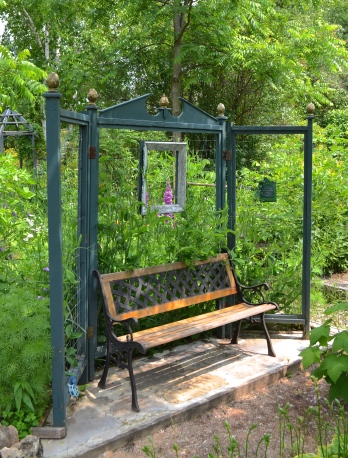 Sweet peas climb the wire screening of this once solid screen to help camouflage the garden bench. (Photographed at Keppel Croft gardens in Big Bay, on the Bruce Peninsula, Ontario, July, 2015.)

THE FOLD–’EM–UP–AND–PUT–’EM–AWAY HIDEAWAYS: Sometimes you just want to hideaway for awhile. Or maybe you’re just not interested in a permanent hideaway in your garden. That’s OK. There are a gazillion ways to create your own pop–up retreat. Here are two of my favourites. The poolside lounge (spied during a garden tour in downtown Toronto) is very chic indeed but it does get the job done. And then, there’s my parachute. It’s decommissioned meaning you can’t jump out of a plane with it any more. But it still works a charm as a big, billowing tent/privacy screen/personal Circus Big Top. As a Girl Scout in Washington, me and a dozen other giggling tweens would sleep under one huge decommissioned parachute during our epic Puget Sound canoe trips. It sheltered us from wind and rain and looked absolutely awesome. So, as a fully grown woman, of course I had to have one. If you can get your hands on one, you can be in hideaway heaven. The cords within the sleeves that crisscross over the entire chute make hanging it up in trees easy. Just don’t hang it up in a strong wind. It will set sail.

My wonderful parachute has been through many incarnations in various gardens. Here it serves as shelter from breezes and possible rain forecast later that night, as well as privacy from near neighbours. (Photographed July, 2013.)

STILL GOT CABIN FEVER?: Go for it. But do consider building it at the back of your own garden. In your own garden, anything is possible. Let me know about your favourite garden hideaway!