The Knot Garden at the Garden Museum, London. Photo taken in February, 2015.

One day, somewhere in the middle of the 23rd century, Spock boldly goes on a plant hunt (watch the video clip at the bottom of this posting). He discovers a species that, at first, he dismisses as the horticultural version of “a happiness pill”–as if such a thing couldn’t exist. Every gardener knows that they do exist. And every garden has an utterly unique collection of them.

That we have so many plants to choose from is thanks, in part, to the Tradescants, father and son plant hunters who, from the late 1500’s to mid-1600’s, shared a first name and insatiable curiosities. Each went on long and hazardous treks that took them as far away as Russia (John, the Elder) and Virginia (John, the Younger) returning with their finds to their home in London.

Across the Thames from Big Ben, in the deconsecrated medieval church of St. Mary-at-Lambeth. is the small but fascinating Garden Museum. I had the pleasure of visiting it a few weeks ago, intent on seeing the Knot Garden. Once the church’s cemetery, the garden is planted with some of the species the Tradescants had “discovered”. Hemmed in by the towers of Lambeth Palace and towering office buildings, it’s a tiny green gem. It’s also the Tradescants final resting place.

Though John the Elder and John the Younger are probably best known for the plants they found, they collected “rarities” of all kinds, from bones (animal and human) to jewels, seashells to poisoned arrows. Their Cabinet of Curiosities was donated in 1677 to the University of Oxford and later formed the basis for The Ashmolean, the oldest public museum in Britain. This might explain why the Tradescants’ tomb, which sits to one side of the Knot Garden, looks like something Indiana Jones would’ve unearthed. It’s covered in fantastic stone relief depicting the natural (trees, shells, a crocodile!?!?) and the unnatural (a seven-headed monster). The neighbouring tomb of Captain Bligh (yep, that Captain Bligh), looks positively humdrum in comparison. (Click on any photo to read more about the tombs and garden. All photos taken in February, 2015.) 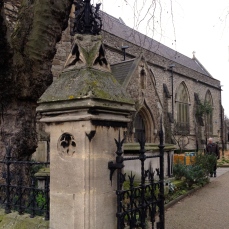 The gate at the front entrance to The Garden Museum in London.

Portraits of Tradescant, The Elder (on the left), and his son with an illustration of their tomb is displayed inside The Garden Museum.

One end of the Tradescants’ tomb depicts a 7-headed monster hopefully not encountered on one of their epic plant-finding missions.

The Tradescants’ stone tomb reflects their curiosity for the natural world with fantastic carvings of, among other things, trees, shells and a crocodile. 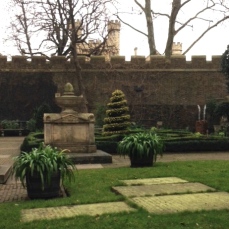 The Knot Garden with Lambeth Palace in the distance. The tomb topped with a carving of a breadfruit is the final resting place of Captain Bligh (he of the H.M.S. Bounty).

A view along the wall separating the garden from the grounds of Lambeth Palace.

You can have a little bit of botanic history in your own garden by growing the pretty, iris-like Tradescantia virginiana. Its common name is spiderwort or spider lily–inspired by the fact that the sap from the plant’s stem dries into fibres resembling spider’s silk. The plant grows well in Southern Ontario–almost too well. A prolific self-seeder, it can infiltrate a flower bed as it has done mine.

Leonard Nimoy died last week at the age of 83. In his final posting on Twitter.com, he shared a lovely thought:

“A life is like a garden. Perfect moments can be had, but not preserved, except in memory. LLAP.”

Nimoy signed off with his signature LLAP–the acronym for Live Long And Prosper. Finding happiness in the fleeting beauty and enduring mystery of plants is one sure way to do that.