I had fun last year gathering ideas for how to rock your garden. There are a whole lot of gardeners out there creating gorgeous environments using stone they’ve either recycled from their own plot of land or brought in. Now, like collecting different coloured pebbles, I’m hooked on finding inspirations. Here are more DIY rock garden ideas for gardens of all sizes using rocks of all sizes.

The newly renovated Rock Garden at the Royal Botanical Gardens outside of Hamilton, Ontario, is a spectacular example of how far you can go when you’re starting with nothing but rocks and then adding even more. Before planting up this abandoned gravel pit, about 10,000 tons of regional limestone was cut and placed to build up the framework for what is now a robustly green grotto. Though most of us don’t have the means or the space to build staggered cliffs of rocks, there are plenty of ideas to steal from this garden. One of the most inspiring (and easy to do) is the way the garden designers avoided that polka dot effect created when all the plants differ from one another and are scattered about like precious specimens. Instead, groupings of plants were positioned to create swaths of texture and colour just as you might see in a large, flat garden bed.

Part of the steep wall that partially encircles the Rock Garden at the Royal Botanical Gardens, Hamilton, ON, shot in July, 2016.

Evergreens are cleverly used, too. I always think of plain old boxwood as destined to be a hedge or filler plant. But this Buxus sinica var. insularis ‘Winter Beauty’ (seen in the photo below left) looks practically exotic with its lush foliage tucked into shelves of rock along with various hostas. In another, sunny rock garden bed, I did a double take when I saw this prostrate evergreen (seen in the photo at right, below). Because the large sprawling Pinus strobus ‘Niagara Falls’, is equal in scale to the rocks, it gives up its usual role of specimen plant to look more like a wonderfully quirky ground cover.

Hostas and Buxus sinica var. insularis ‘Winter Beauty’ are tucked between shelves of rocks in the Rock Garden at the Royal Botanical Gardens, Hamilton, ON, shot in July, 2016. 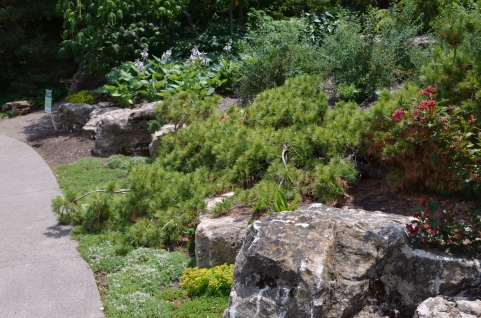 The sprawling Pinus strobus ‘Niagara Falls’, is complementary in scale to the large rocks so, rather than playing the usual role of specimen plant, it takes on the wonderfully quirky role of textural ground cover. Rock Garden at the Royal Botanical Gardens, Hamilton, ON, shot in July, 2016.

Here, big rocks are used the way you might normally use much smaller rocks. This string of boulders delineates two large garden beds and although, at first glance, it looks like a pathway, it’s simply leading the eye to a small pond, just seen in the background

This string of rocks looks like a path but actually only serves to lead the eye. Shot at Rock Garden at the Royal Botanical Gardens, Hamilton, ON, shot in July, 2016.

A set of stone steps or stairs may be de rigueur for any rock garden, but I didn’t appreciate how subtle differences in the stones’ shape and placement can make a big difference to the overall effect until I visited the Rock Garden. For a staircase acting as grand entrance/exit, extra wide slabs of smooth stone were used. Then, to break up all those horizontal lines, interestingly shaped boulders were placed like garden sculptures, breaking up the rhythm of the stairs and working like gate keepers, forcing groups of visitors to slow down and enjoy the views. Other, narrower sets of stairs twisted up slopes every which way–you couldn’t see where you were being led. These staircases were often much more roughly hewn, adding to a sense of mystery.

Smooth slabs of stone in this staircase are contrasted with rough boulders acting sculpture and traffic calmers. Shot at Rock Garden at the Royal Botanical Gardens, Hamilton, ON, shot in July, 2016. 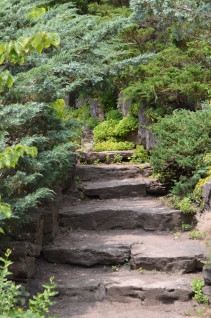 A staircase of rough hewn stone. Shot at Rock Garden at the Royal Botanical Gardens, Hamilton, ON, shot in July, 2016.

Rocks are excellent for edging a garden bed. These two examples aren’t strictly from rock gardens but they do show rock borders used a little differently. In the photo at left, roughly shaped stones are placed haphazardly along the border of the bed. Low growing perennials and succulents are planted around and in front of them to further soften the line between lawn and bed. The photo at right shows large, flat stones informally stacked to multitask as raised bed border and informal seating. 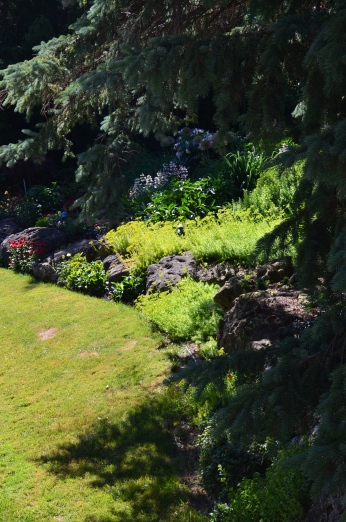 Rocks can act as a border for a bed without having to be lined up. The rocks in this photo serve the purpose of hemming in a garden bed but are informally placed for a more relaxed look.

Large stones can work to edge a border, help create a raised bed and offer an informal seating.

You don’t need a garden bed full of rocks to have a rock garden, in my opinion. A rocky garden can be just as lovely. Rocks can add shape and colour to a flower bed as well as help deter erosion. And with more earth between the rocks, you have more room to play with. Succulents next to roses? Why not. The bright contrast in the garden bed shown below right was so refreshing to see.

Succulents nestled in rocks next to vibrant roses? Why not if the plants are OK with the available soil and light. You’ll get an unusual play of colour and texture.

Whether you’re working with pea gravel, river stones or a bunch of “stone potatoes” you dug from your own garden, small rocks can be very handy in any garden–rock garden or otherwise. Used to line a pathway or edge a bed, their light colour and even texture work well as contrast in the garden. In the photo below right, small stones were used to great effect in a very narrow bed up against a house. This space would’ve been hard to plant but the small succulents look right at home. By the way, that’s not a lawn in the photo. It’s a huge patch of carpet thyme.

Gazillions of small, flat stones that were collected as these garden beds were dug up have now become an effective and good looking mulch. Shot at Keppel Croft Gardens in Big Bay, ON, in July, 2015.

Small stones all basically the same size, colour and shape, work beautifully not only as an efficient mulch (keeping weeds out and moisture in) but visually like a rippling river, leading the eye wherever you want it to go. But you don’t have to go the same-size-same-colour route. When you want your rock garden to have a more natural feel, adding stones in a wide variety of shapes and colours (shown in the photo at left) works well.

The rocks used as mulch in this garden are unevenly shaped and of different colours, breaking the rule about mulch needing to look consistent. Photographed at Coastal Maine Botanical Gardens in June, 2016.

Small rocks, used as mulch, not only keep garden beds from drying out quickly but add a sense of movement. Shot in July, 2015.

A garden in one rock

There are rock gardens and then there are gardens in a rock. If you don’t have a lot of space, one big rock can multi-task as garden sculpture and plant container. Place your prize close to a seating area so that you’re close enough to enjoy the tiny plantings.

This grouping of different coloured succulents are growing on a tall rock that was placed in a large, shallow cement container. The overall effect, when seen close up, is of an underwater scene.

These succulents are eye-catching for their unusual colouring. Shot August, 2015.

A large boulder can double as garden sculpture and plant container. Shot July, 2016. 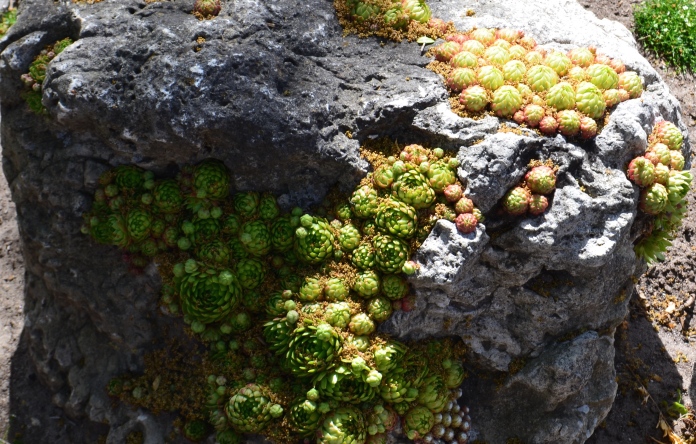 Tiny Hens and Chickens make homes in the crevices of a rock. Shot August, 2015.

Let me know your rock garden ideas. Big or small, rocks and gardens can work magic together in so many, many ways.

MOSTLY MONTREAL, MOST OF THE TIME

Travels in Finland and abroad

"Looking Back on Our Four Seasons of Life"