A variegated variety of Goutweed (below) plays well with a tall hosta (above).

Nowhere is the old adage about beauty being in the eye of the beholder more appropriate than when you’re staring at a great weed. The unfortunately named Goutweed is a weed for sure. But what a beauty. And handy, too–if you feel like living dangerously.

Aegopodium podagraria aka Goutweed aka ground elder, bishop’s weed or snow-in-the-mountain thrives in hard-to-plant shade areas where the soil is, well, lousy. No nice, fluffy organic mulch anywhere to be seen. Just lots of hard, compacted, poor soil. This plant says “Bring it on!”

I’d like to say that I purposely planted this plant but it actually made itself at home, nicely filling in a bed in our backyard that’s basically unwelcoming. And it’s doing a nice job of keeping the area unwelcoming, excluding other weeds with its dense mat of foliage.

The trick to Goutweed is not have it take over the rest of your garden or the garden next door. So to avoid risking the wrath of your neighbour, chop off the flowers (they’re not all that pretty so it’s no loss) before they seed. And keep it from running amuk via it’s underground rhizomes by containing it with sturdy plastic garden bed edging sunk a couple of inches into the ground.

Sure, you could battle it to the ground. There are (labour-intensive) ways of getting rid of it. But why not let live and let live. This weed, by any other name, would look just as sweet. 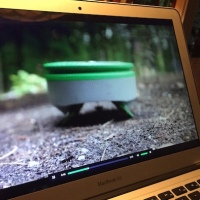 Only the Sense of the Sacred can Save us