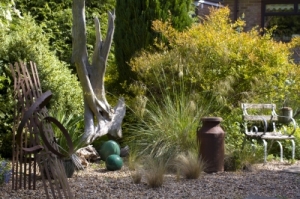 No lawn, no problem?

“Brown Is the New Green”

Though the people quoted and the lawns and gardens featured are in California, the topics of water shortages and life without lawns are important. Up here in Southern Ontario, our grass is still hidden under a blanket of snow. But now’s the time to start putting some serious consideration into the future of our lawns.

Rare is the garden in suburbia that doesn’t have at least a small patch of green grass. Are we ready to abandon this symbol of status, proud homeownership and green thumb-ness? Even if you’re not a fan of lawns, you’ve got to admit that they do a beautiful job of setting off all the other stuff in your garden like a classic frame sets off a painting. Then there are kids to consider. How are they supposed to play outside if there isn’t a lawn for playing ball or running through a sprinkler?

Having a so-called brown garden isn’t new as garden design trends go–at least not on the West Coast. Growing up in the late 60’s in Tacoma, Washington, my brother and I lived in a neighbourhood where the height of style came in the form of a Japanese/American-inspired landscape. Lawns were beside the point. Our home came with a backyard completely covered in “beauty bark”–Ontarians would recognize it as brown bark mulch. Instead of flower beds, rhododendrons flourished within a thoughtfully thinned grove of young oak trees and lined one side of a dry pond filled with small pebbles which we raked into wavy patterns. A large patio, its surface finished to mimic the texture of the pebbles, sprawled over a third of the backyard. My Dad was proud to admit he didn’t own a lawn-mower and the only time we pressed the lawn-sprinkler into service was to jump through it.

This spring, we all need to think about making Brown the new Green, whether you’re new to the idea or revisiting it. It’s a trend that’s no longer about style, it’s about our future.

2 thoughts on “Are you ready to give up your lawn?” 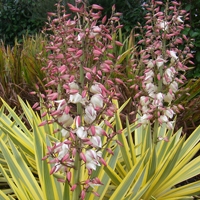 MOSTLY MONTREAL, MOST OF THE TIME

Travels in Finland and abroad

"Looking Back on Our Four Seasons of Life"